Charlene was rejected by a boy once, and only once. That boy changed her life forever, even as she ended his.

He was a bad boy in high school. She had been a good, considerate and studious girl.He had used her and dumped her and shamed her in front of her friends and the entire school. She had run home distraught, in tears.

But when she came back back to school, she came back a different Charlene. The good girl was gone - replaced by renegade vixen, a wanton force of nature.

What the others did not know was that she had been transformed. She was now secretly a demon, with the powers of Hell at her command.

She won the boy back before the bell rang to end the lunch hour at Mountain River High. His seduction was oh so easy, even without her supernatural powers. He could not resist the new Charlene.

She convinced him to skip school and take her for a ride on his sleek, fast motorcycle. Holding tightly to his back she whispered in his ear “Faster, baby, faster”

They flew through the backroads out of town towards the Mountain River valley, hurtling past the blur of the pine tree forest.

As they crossed the old bridge across the river,  she took her revenge.

Her eyes burning red she took on her Hellish form, unfurling glossy black wings, forward curving horns and a long muscular tail. As she flew into the air her tail struck the back of the machine, delivering an incredible force and sending the boy and the bike over the guardrail and into the trees far below.

As she landed, her newly dark heart revelled in the delicious horror of the moment, her first taste of her real power. Her tail writhed as her wings curled behind her.  But a small part of her old heart cried silently for the boy lying dead below, crumpled beside his burning motorcycle. She wondered if she would ever feel that way about anyone else again.

As she reverted to her human form she started planning what she would wear to the funeral. She thought she might say a few words about how the boy had sacrificed himself to save her. She practiced a sad face for a moment, then chuckled softly to herself. The hell fire in her eyes matched the flames from the wreckage below. 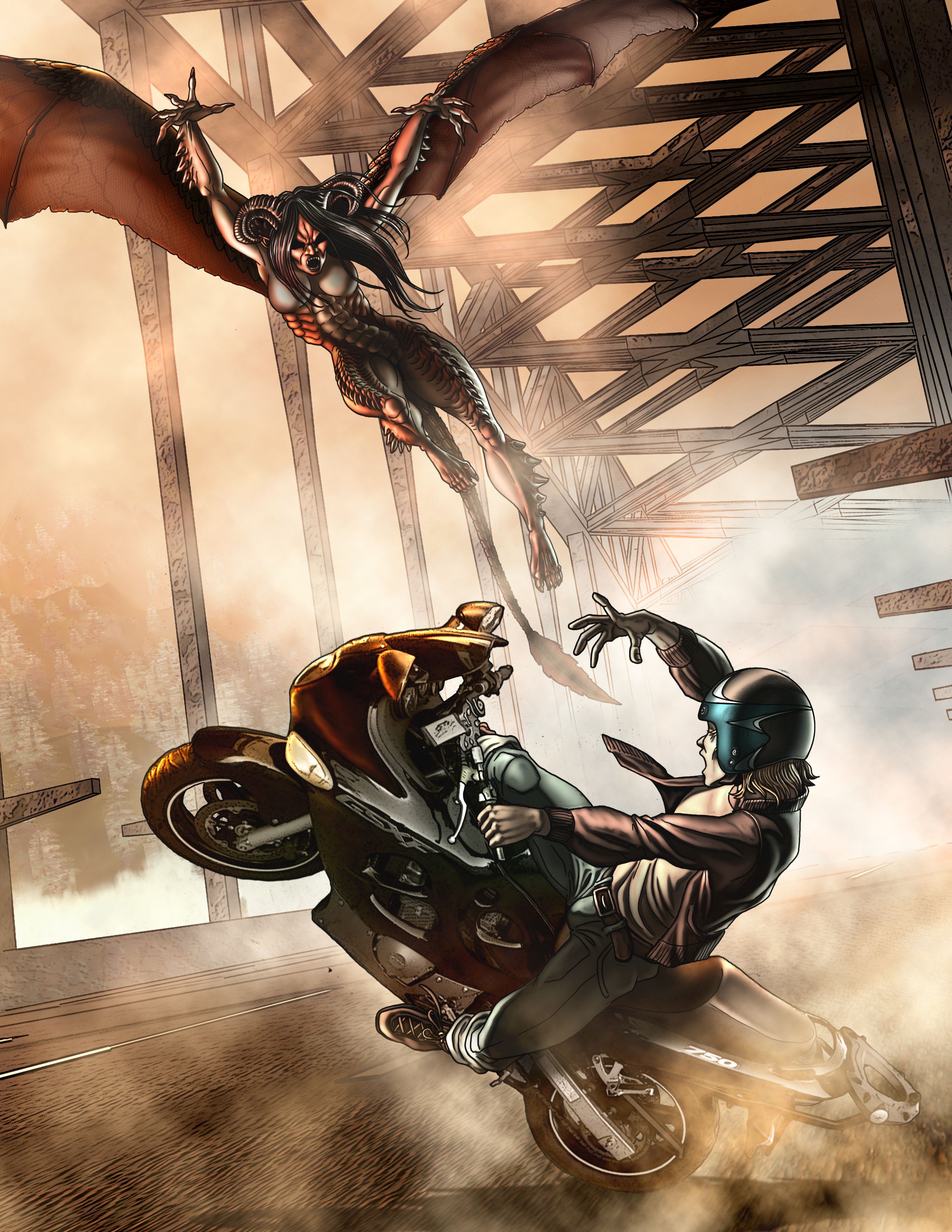 Charlene had physical relations with many boys and men, but she only really loved the Devil.

When she slept, he would lovingly posses her.

She would enjoin with him in the realm that was his universe. The first time he came for her, he met her in his human form on the terrace of his beautiful villa overlooking chiseled mountains and a blue green glacial lake. The soft, chill air heightened the sensation of his touch, raising her senses until she found herself awake and alone in her own bed, spent and sweating.

Over time, she learned to better control her own manifestation while she was with him. Switching between human and demonic forms, the two of them would strain with the force of their lovemaking, tangled in unison, sometimes on the ground, sometimes in a bed, sometimes flying under black wings catapulting through the air.

One night, she was laying in bed beside her latest sexual conquest, having dominated and exhausted him. His soft snoring echoed timidly in her ears as she fell asleep herself. As soon as she slumbered, the Devil came to posses her.

Her body rose above the mattress of the bed, the light sheet clinging to her body. She began to writhe as she joined with her lover in their dream world. They flew there together, locked in tight embrace and feral passion.

The boy awoke to find Charlene floating above the bed writhing in ecstatic convulsions.

Charlene looked into the Devil’s eyes as her consciousness was dragged back to her body in bed. Without realizing it, she brought her demonic form with her, back across the void.

As the boy watched in horror, Charlene’s beautiful body was transformed. Black horns sprang forward from the sides of her head. Black wings erupted from her back and spread across the bed, hitting him in the face.

The boy screamed again, much louder this time.

As he desperately tried to flee, Charlene’s pointed tail struck. Agile and quick as a snake striking its prey, her tail wrapped around his leg and dragged him back to bed. Charlene pivoted on top of him, her magnificent wings framing her long, wicked horns as he looked up at her.

She sighed to herself. The boy had been fun, clever and had an athlete’s stamina. She took his arms with her clawed hands and pinned them to the bed. As she leaned down to kiss him one last time her tail snaked up to his throat and wrapped around it twice.

She looked into his vacating eyes until he stopped struggling. With a casual strength, the coils of her tail moved apart and separated the boy’s vertebrae. She fell back off him as she transformed back to her naked, sweating human form.

"Shit" was all she said.

Wrapping herself in a robe and grabbing her car key, she went to her garage, opening the main overhead door. She backed her Mercedes out onto her driveway, parked and walked back into her garage, closing the big door behind her again.

She struggled to lift the big dead boy at first and so took off her robe and returned to her demonic form. She moved sideways with him, out the door to the garage, catching her wings in the doorway several times while cursing in an ancient demonic tongue.

Once in the garage she dropped to one knee. Holding the boy just above the floor and wrapping them both in her black wings, she briefly summoned a flurry of hell fire. The body of the boy fell to the floor as soft, grey ash, spreading gently in a small cloud as it rebounded.

Standing up and brushing the ash off her body and shaking her wings, she returned to her human form and went to get a broom.