Chapter Three - Germany vs the USA

The sun was setting behind the Rocky Mountains when Charlene aimed her Mercedes GT convertible east along Highway 1, back towards Mountain River. She had the roof down and the wind tugged on her long hair, pulling it behind her. The sleek car purred as she glided through the winding roads of the park.

Once she passed Canmore and the Seven Sisters mountains, she opened up the throttles and started picking off slow moving cars and campers. While passing one train of slow movers, she was surprised to be flashed by fast approaching high beams coming up behind her.

She eased her German supercar to the right lane to let the car pass.

A low rumble came from a purple Dodge Challenger as it caught up to her. The driver slowed down to check out her and her car, lowering his sun glasses as he slowly passed.

Returning his gaze for a moment, she paddled shifted down two gears and unleashed the full power of her twin turbocharged V8 engine. Swerving into the left lane ahead of her rival, she paused only to make sure that he was following and began to systematically carve through traffic. The Challenger was on her tail like a bumper sticker as they flew past the other vehicles. The powerful cars gained ground like cheetahs hunting. The sound of their exhausts cackled and strained off the nearby mountains.

Once clear of the mountains, traffic opened up. Side by side they raced, past 160, 170, 180 kilometers per hour. The red and blue lights they saw on the horizon were accompanied by a low pass by an RCMP aircraft, waggling its wings. They slowed to a stop side by side as they came to the police roadblock.

They took him from the Challenger first. Two officers with hands on their guns removed him from the car, cuffed him, frisked him and led him towards a cruiser. As he was being arrested, the other police cruiser backed up to allow the Mercedes to leave. The black haired beauty blew him a kiss as she sped away.

Neither knew at that time that they would change each other’s life, and afterlife forever. 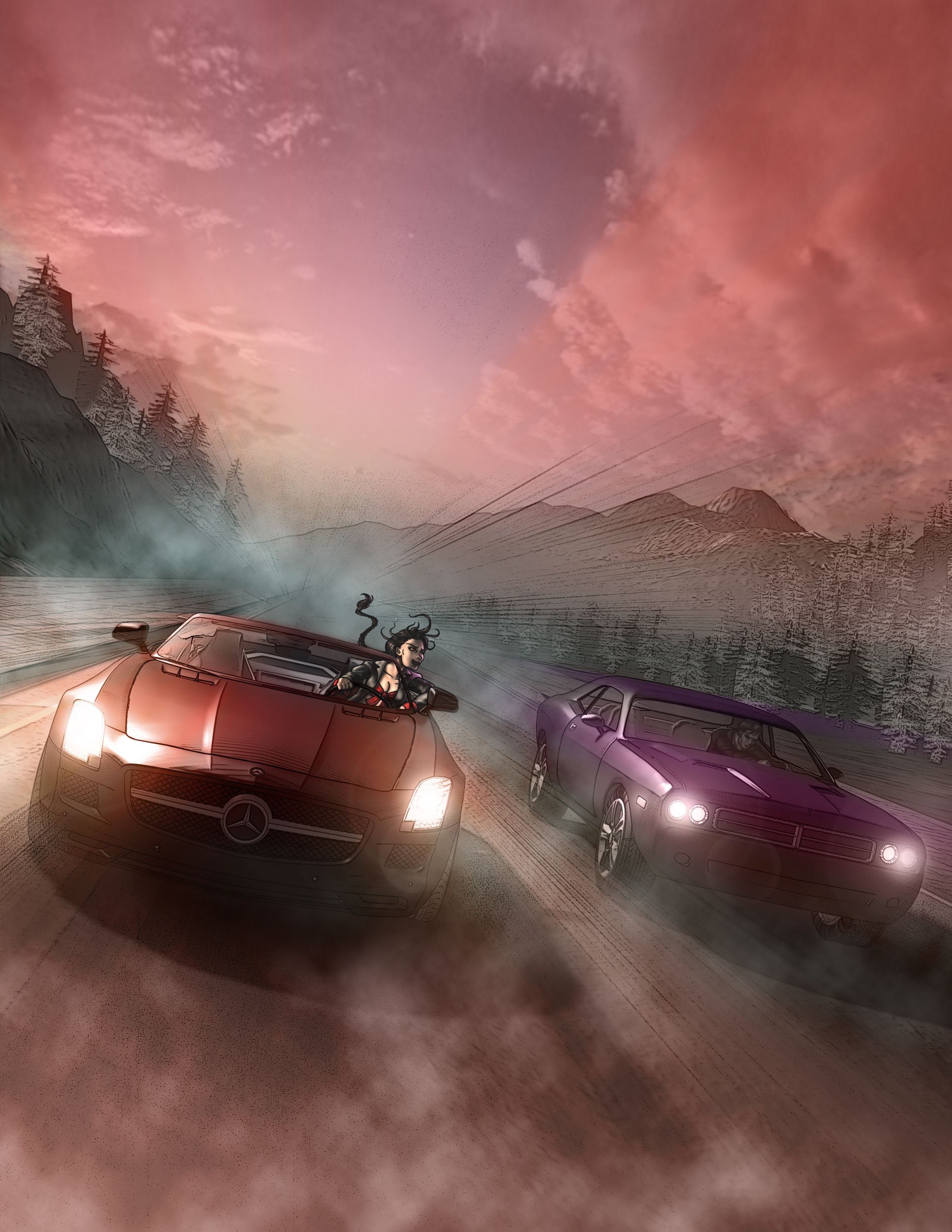 Charlene saw him next, unexpectedly, at Lucky’s Saloon in Mountain River. She heard his car first, as the low lope of the Challenger’s motor announced itself through the thin, brick walls of the old bar.

Charlene watched from her roped off private table as Luc came through the door and sat down in front of Lucky the bartender. The first glass of malt whisky disappeared nearly as quickly as it was poured.

Luc called out to the bartender. “Another double, on the rocks this time, please. You can use the same glass. (Pause) Hey man, don’t mind me asking, but how did you lose a leg and an eye?”

“What a drag man. I was there with JTF2 but I never got tagged.  I know I’m lucky." Luc replied.

The bartender chuckled, "No man. I’m Lucky. That’s my name, Lucky LeHereux. Don’t wear it out."

"Well I’m pleased to meet you Lucky. My name’s Luc."

Lucky motioned out the front window towards Luc’s Challenger with the towel and glass in his hands. "That’s quite the beast you’ve got there."

Lucky asked him back. "Have you always been a Mopar guy?"

Luc sat back and took a sip of his drink. "Yeah. Started with a ’70 Challenger convertible. 440, 4 speed, white interior, white top. Wish I still had that car."

Lucky said, "That sounds sweet. What happened to it?"

"Well man, I had to leave it in Texas. It was all because of a girl." Luc sighed.

Lucky put down the glass he had been polishing and free poured some more whisky for the two of them.

"Oh man. It gets better every time I tell it." Luc laughed.